Shaoxing Snow Peak Air Gun Company was established in 1976. The spa is an expert in manufacturing and designing air guns for civilian uses. The company is located in the Yangtze River Delta, near the port of Shanghai. The main aim of the company is to perform and flourish as a leader in the world of shooting equipment manufacturers.Spa brings you a best seller of Spa xt207 air rifle – 5.5mm with scope combo

Currently, Snow Peak Company has several patents and 10 series of products with more than 30 innovative designs of air guns. As Snow peak is a famous air gun manufacturing company, it has a mature OEM with precise and sturdy designing, it is keenly also involved in the exchange of experience and expertise with an internationally acclaimed gun

An air gun (often called pellet gun or BB gun depending on the projectile) is any kind of small arm that propels projectiles by means of compressed air or other gas, in contrast to the explosive propellant of a firearm. Both the rifle and handgun forms (Air Rifle and air pistol) typically propel metallic projectiles, either pellets or BBS. Certain types of air guns, usually rifles, may also propel Arrow or darts with feathers. A pellet is a non-spherical projectile designed to be fired from an air gun.

Xt207 is the newest design for the younger or smaller shooter. made from abs(acrylonitrile butadiene styrene)so this air rifle is very light.
The shark-fin cheek piece ambidextrous stock is durable,light-weight, rugged with a pistol-type hand grip makes this rifle truly ready for all-weather use.
Steel barrel covered with abs makes it rust-free.it also features fully adjustable fiber optic sights, dovetail grooves, and a backstop.

This combo includes the following items

Check out our other Spa products 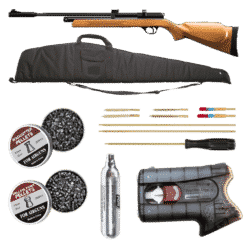 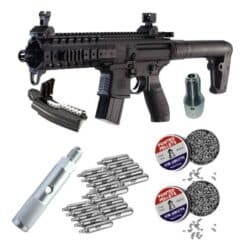 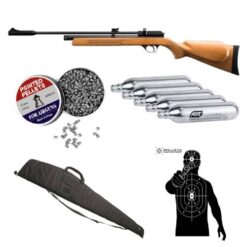 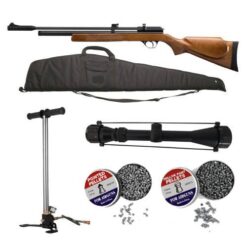 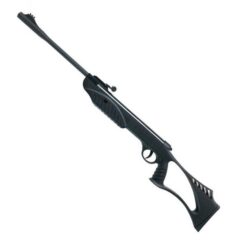